With the light of Chanukah about to peer through Hashem’s lattice-work, I would like to share an article that I have written which will hopefully inspire your Chanukah experience.

Also, I invite you to view my new Self Confidence book series, below. I am available to present the Self Confidence Seminar to your community for an individual lecture or a Scholar in Residence Shabbaton.

Wishing you much light. 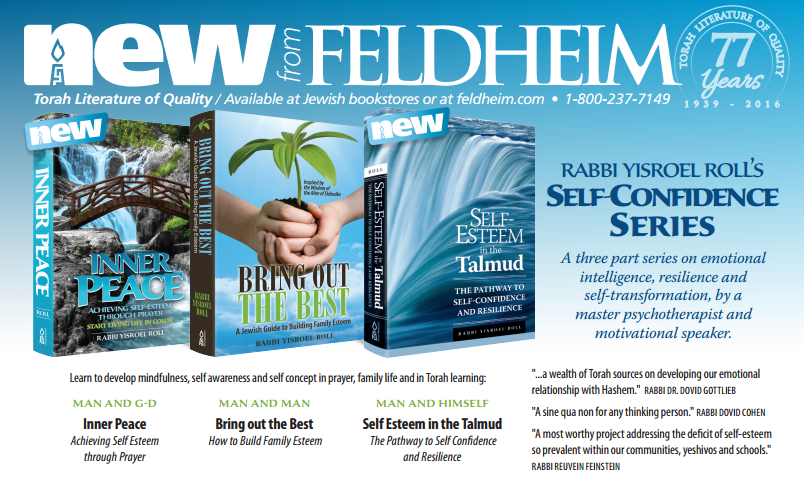 Alone Against the World—Chanukah’s Antidote to Loneliness

The poignant single candle lighting up your window on the first night of Chanukah holds the key to solving the pain of existential loneliness. The solitary candle is an expression of the halachah brought in the Gemarra (Shabbos 22b): Ner Ish Uveiso”–one candle fulfills the mitzvah for the entire household. The basic halacha is one candle should be lit every night. Of course, we pasken like Beis Hillel that we add one candle every night to bring the majesty of eight candles filling our souls on Zos Chanukah–on the eighth night. But, the basic halacha is that only one candle per night is required. How can one lonely candle be sufficient?

Loneliness is a devastating emotional state. It can lead to a feeling of emotional emptiness and isolation. You may feel alone and uncared for—which often leads to feeling unworthy of love, and ultimately a lack of self-worth and value. Feeling alone is an understatement. The feeling of emotional pain is with you every waking moment. You go to sleep depressed–and awaken to despair and foreboding. You feel uncomfortable in your own skin. There is a pit in your stomach—and you second guess your decisions. Even worse, you begin to second guess your life.

The Midrash comments on the encounter between Yaakov and the angel as follows: Just as it says about Hashem עֵינֵי גַּבְהוּת אָדָם, שָׁפֵל, וְשַׁח, רוּם אֲנָשִׁים; וְנִשְׂגַּב ה לְבַדּוֹ, בַּיּוֹם הַהוּא.— And Hashem alone shall be exalted in that day,” (Yeshayahu 2:11), so too it states about Yaakov וַיִּוָּתֵר יַעֲקֹב, לְבַדּוֹ; וַיֵּאָבֵק אִישׁ עִמּוֹ, עַד עֲלוֹת הַשָּׁחַר— And Yaakov was left alone; and a man wrestled with him until dawn.” (Bereishis 32:25) Eitz Yosef explains: Just as Hashem is One and unique in the heavenly sphere, and there is no one like Him, so too Yaakov was alone and unique in the earthly sphere, and there was no one like him in merit and strength. Therefore, the angel was jealous of him and wrestled with him. (Bereishis Rabbah 77:1)

The Maharzu (Rav Ze’ev Wolf Einhorn of Horodna) explains that Hashem gave Yaakov the awesome strength needed to stand up to the angel. This “awesome strength” that Hashem gave Yaakov is aloneness. The key to Yaakov’s success against the angel of Esav is that Yaakov’s aloneness was an extension and expression of Hashem’s aloneness. Aloneness connotes individuality, independence, and oneness.

We usually think of aloneness as a negative state that leads to emotional loneliness. Many people suffer from loneliness, and it can be debilitating. But the Midrash, as explained by the Sifri and the Maharal, is making an astounding point. Aloneness leads to inner serenity when a person becomes alone and integrated with himself. This means that he accepts his aloneness and uniqueness as an expression of Hashem’s aloneness and uniqueness. If you are alone, you can find wholeness within yourself when consciousness of God fills your mind, feelings, and actions. There can be no internal turmoil or confusion when you fill yourself with the awareness that your entire being is an expression of God’s Will. There is no room within your mind and psyche for inner turmoil because you are alone, one, and aligned with the Will of Hashem.

You can then revel in aloneness, represented by the singular candle of the first night of Chanukah, and not allow it to turn into the depressing mindset of loneliness. This is instructive of the last part of the verse, which says: וְאֵין עִמּוֹ, אֵל נֵכָר— And there was no strange god with Him.” This means that God’s “aloneness” should bring man to become conscious of God’s singularity. God is alone, and man should strive to think of nothing other than Godliness alone — that everything in the world is a manifestation of God. It is the hallmark and goal of an eved Hashem to experience “God consciousness” as much of his waking hours as possible. When he does this and realizes that there is nothing except for God, that God is reality and that your psyche is an expression of that reality, then there is no room for other gods within you, or with you. You can then achieve inner tranquility by virtue of your aloneness.

This idea is illustrated most profoundly by Rav Tzadok Hakohen in Pri Tzadik on Parashas Bechukosai, in which he states that the mitzvos and Hashem’s attributes are not external or separate from His being; rather they are manifestations of Hashem Himself. This is more than being intrinsic to His being. They are one with His Being in an absolute way that the human mind cannot comprehend. This is the meaning of the concept that Hashem keeps His Own mitzvos, i.e., Hashem prays, puts on tefillin, and observes Shabbos (Berachos 6b-7a). That Hashem rests on Shabbos means that He brings everything in creation together in a harmonious oneness that reflects His Oneness.

When we rest on Shabbos, we create an inner reality of oneness and contentment such that we need not travel anywhere or perform any creative acts. Instead, we are at rest, or at one, within ourselves. We have arrived at our destination: the integration and wholeness of the self. (Schwartz, Yitzchok. Rav Tzadok Hakohen on the Parsha. Jerusalem: Mosaica Press, 2014.)

I invite you to proactively seek the aloneness, and therefore the independence and uniqueness, that resides within your own psyche and self. You can then turn emotional loneliness into the awareness that you were individually chosen by Hashem for a unique mission that only you can fulfill. The solitary candle in the window on the first night of Chanukah reflects your own unique individuality and uniqueness. May the light of Chanukah inspire you to discover your life mission and in turn, bring new light and motivation into your life, and into the lives of your family and community.