Twelve Boys and a Coach

The Talmud teaches: Difficulty comes into the world only on Israel’s account. Yevamot 63a

What does this mean? Earthquakes, tornadoes, hurricanes, war, Chilean miners lost underground, and 12 boys and their coach lost in a cave in Thailand, all happen in order to teach the Jewish People about our destiny and how to grow in our collective and individual consciousness.

Over the past three weeks, the world has been gripped by the poignant and miraculous story of Twelve Thai boys, aged 11-16, from the Wild Boars soccer team, who were lost in a perilous underground cave for 10 days, until they were discovered and rescued by a international team of Navy Seal divers. As part of a soccer morale-building exercise, the Twelve boys were led by their 25 year old coach into the Tham Luang cave in Northern Thailand when it was relatively dry, as had been done by many teens before them. It was a rite of passage. They planned to write their names on a wall deep in the cave and then make their way out and back home. 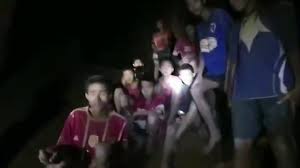 While the group was in the cave, monsoon rains filled the cave with flood waters, blocking their escape. They moved further into the cave until they were lodged 1.8 miles into the long cave, where they found an air pocket and a land ledge. There they waited in darkness with scarce food, depleting oxygen, and drinking rain water dripping from the cave walls, until they were miraculously found alive by British Navy seals on Day 10 of their ordeal. It would take a further 7 day complicated, sophisticated international team effort to extract them from the cave, and return them to their parents.

The Gemara in Yevamot is teaching us that God is “saying something” to the Jewish People though this ‘story.’ What is that message?

The Twelve Boys and their Coach, sound coincidentally similar to the Twelve Tribes, led by their father Yaakov, embarked on a journey into the darkness of Egypt, in search of food during a famine in Canaan. Soon they became enslaved in darkness, eating scarce rations, and prayed for redemption.   It is in this fiery furnace of slavery that they were forged into a nation through the horrifying crucible of Egyptian depravity, which matured their national character into greater sensitivity to the plight of others, humbled, compassionate and givers of kindness. As the Talmud teaches, This nation is distinguished by three characteristics: They are merciful, humble and benevolent. ‘Merciful’, for it is written, And show you mercy, and have compassion upon you and multiply you. ‘Humble’, for it is written, That His fear may be before you. ‘Benevolent’, for it is written, That he may command his children and his household, that they may keep the way of the LORD, to do righteousness and justice. Yevamot 79a

It is the appreciation for life itself, the air we breathe and the water we drink, that God is “speaking to us” and reminding us to prioritize an appreciation of our very lives. It is through a personal ordeal that we are reminded of our own vulnerability and how, when others show us kindness, and we are redeemed, that we need to become even more sensitized to the needs of those less fortunate than ourselves. 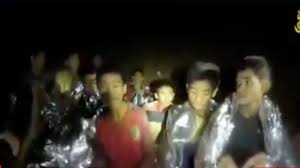 While escaping the rising flood waters in the cave, the Twelve Boys and their Coach were saved by venturing deeper and deeper into the 1.8 mile cave by finding a dry ledge amidst the rising flood waters. On their way out of Egypt the Twelve Tribes, now forged into a nation, and their leader Moshe, walked through the sea, as the Torah states,   But the Children of Israel walked upon dry land in the midst of the sea; and the waters were a wall unto them on their right hand, and on their left. Exodus 14:29. In life we have to seek an island of faith when faced with turbulent waters that threaten to engulf us physically and emotionally.  It is the seeking of the solid ground of faithfulness to God, the Reliable Ledge upon which we take refuge, that can redeem us from the turbulent waters of crisis. 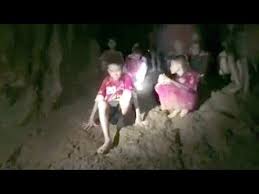 The operation to save the Twelve Boys and their Coach was perilous and impossible. On their way out of the cave there were places that the boys had to squeeze through passageways which were only 40 centimeters wide. King David, expresses what they must have felt, when he said, From the narrow straits I did call upon God; God answered me with expansiveness. (Tehillim 118:5) When in darkness, there is only one address to Whom to turn. This is the address of bitachon-the certainty of God’s Attention, as the Torah teaches us, But you have the LORD taken and brought forth out of the iron furnace, out of Egypt, to be unto Him a People of inheritance, as you are this day. Devarim 4:20.

During the extraction of the boys from the cave, two Navy Seal divers accompanied each boy as they swam, dived, hiked and climbed toward their destination. The Talmud (Shabbat 119a) states that every Friday night there are two angels who accompany a person, on the way home from shul. One who encourages his growth, and the other who attempts to persuade him to remain as he is. Through the message of the Thailand boys, God is asking us to choose which direction we want to follow: growth or status quo. 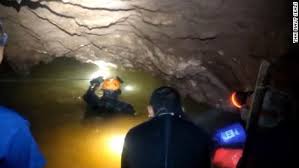 Judaism is not a religion; rather it is a system for personal growth. Prayer is really self-reflection and self knowledge; Shabbat is a time to reconnect with values and to restore relationships with family and the Creator; Torah study is focused on character development and personal growth by learning to walk in God’s ways, by emulating God’s  leadership, compassion, empathy, giving, truth, consistency, creativity, patience, forgiveness and reliance.

Perhaps the darkness of the Thailand cave ordeal itself and the meaningful lessons learned because of it, make us realize that the darkness really is light. And when we seek “redemption” we become conscious that the pain of the ordeal is itself the redemption, when we learn to grow in character from the experience, as the Vilna Gaon teaches that the purpose of life is to grow in character and to become the best person I can become.

Rabbi Yisroel Roll is a motivational speaker and a psychotherapist in private practice in Baltimore, Maryland. He is the author of Conscious-the Art of Being; and Like Yourself and your Spouse Will Too. He can be reached at yisroelroll@gmail.com 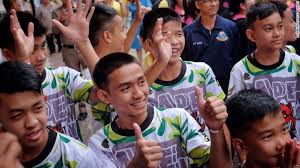